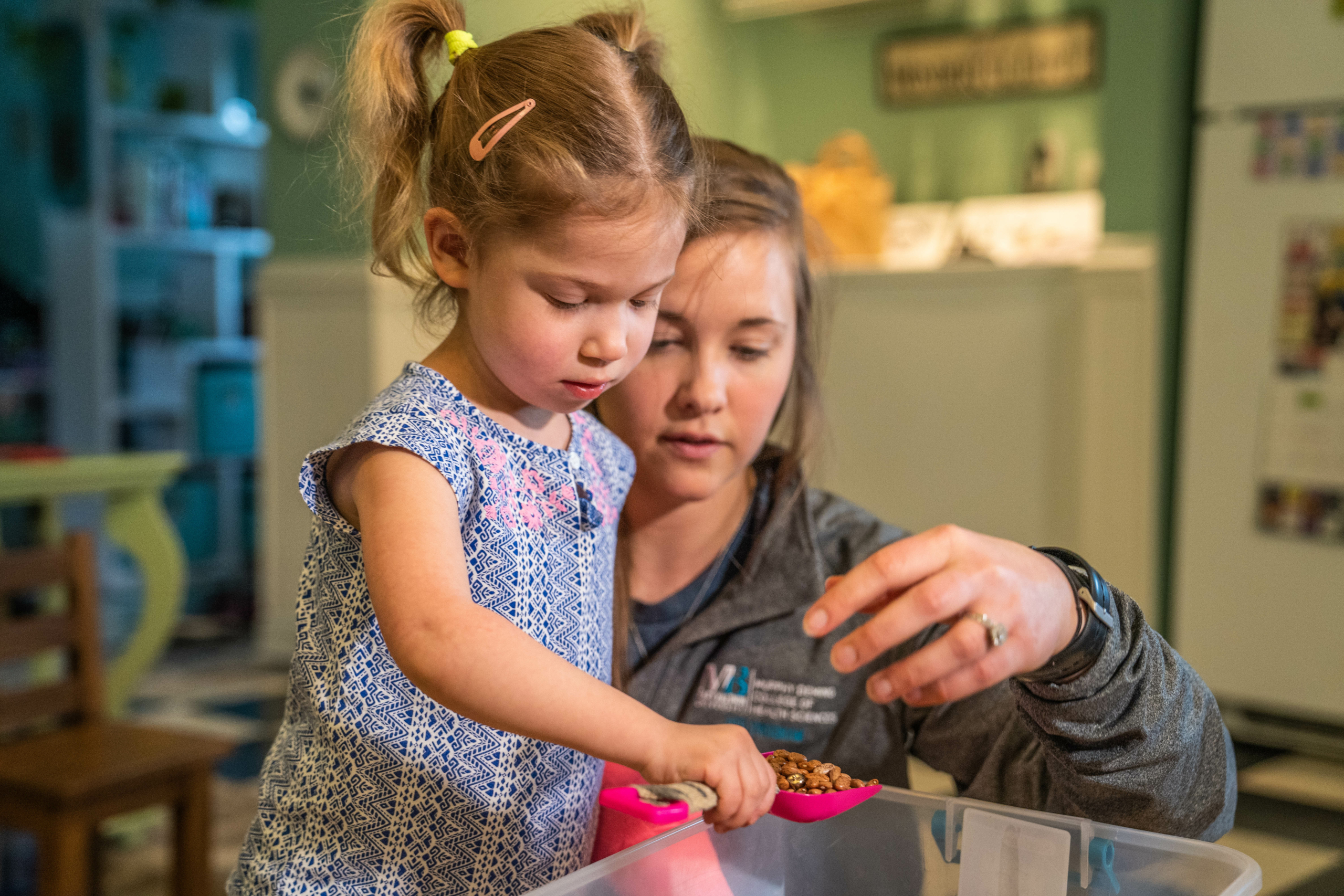 Strokes are devastating events often associated with people over 65. But large numbers of infants have strokes, too.

Now, in the nation’s first multicenter pediatric stroke recovery trial, researchers and clinicians from 12 sites across the United States will evaluate an innovative therapeutic approach to help 8-month-old to 24-month-old infants.

Called I-ACQUIRE, the Phase III clinic trial will examine the effectiveness of a pediatric therapy to increase upper extremity skills, gross motor development, and cognition in 240 children nationwide who experienced strokes when they were under 4 weeks old.

Sharon Landesman Ramey, a professor and distinguished research scholar at Fralin Biomedical Research Institute at VTC, and Warren Lo, a pediatric neurologist at Nationwide Children’s Hospital and a clinical professor of pediatrics and neurology at The Ohio State University College of Medicine, are the lead principal investigators for the five-year, $13.5 million grant from the National Institute of Neurological Disorders and Stroke of the National Institutes of Health.

The I-ACQUIRE therapy will be tested in children at a three-hour and six-hour daily dose for four weeks to determine whether the more intensive dosage produces better outcomes or whether the three-hour daily sessions are as effective.

“It’s an eye-opener when people learn that babies, like adults, have a very high risk for stroke,” Landesman Ramey said. “About half of these infants will not have a permanent impairment, but for the remainder, stroke is a serious event that can produce lifelong, serious neuromotor problems. Given the impact of infant stroke on the child and families, it is astonishing that there is little or no scientific evidence to support the current rehabilitation approaches being used.”

Landesman Ramey and Stephanie DeLuca, the co-directors of Fralin Biomedical Research Institute Neuromotor Research Clinic, developed the treatment approach with colleague Karen Echols when they worked together at the University of Alabama at Birmingham (UAB).  They wrote the first manualized protocol of pediatric constraint-induced movement therapy titled “ACQUIREc Therapy,” from which I-ACQUIRE was developed.

Findings from the trial have the potential to transform clinical rehabilitation for more than 3,000 newly diagnosed infants annually in the United States who have strokes.

Perinatal stroke results from a blockage in an artery within the brain in children before they are born or during the first month of their lives. The stroke damage in the brain commonly results in muscle weakness, loss of motor control, and paralysis on one side of the body. It can also affect communication abilities and other developmental areas.

“We are honored to bring together expertise in pediatric neurology, psychology, rehabilitation, and neuroimaging to this unprecedented clinical trial,” Lo said. “Perinatal stroke is a life-altering neurological condition where there is a vast opportunity to improve early development and independence so that these children can reach their full potential.”

DeLuca and Landesman Ramey originally developed and tested a novel form of pediatric movement therapy, adapted from a form of treatment for adults known as Constraint-Induced Movement Therapy, when they worked together at the University of Alabama at Birmingham (UAB).

Key features include a specially constructed lightweight cast for the child’s non-impaired arm and hand that compels infants to increase their efforts to use the side impaired by the stroke. The casting always occurs jointly with an intensive rehabilitation protocol that is administered for many hours per day, five days a week for four weeks in a row.

Unlike adults, infants have not developed use of their upper extremities, so after stroke they are not “recovering” lost skills; instead, they are acquiring brand-new age-appropriate skills that the therapist induces through reinforcement and a process known as skills shaping.

“Three or six hours of therapy may sound shocking, but as both parents and therapists will tell you, young children love playing and interacting with people, food, objects, and toys — which is what the therapy feels like to the child. Of course, there are moments of frustration when the therapist is challenging the child,” Landesman Ramey said. “For the babies, effective therapy is a form of guided play. They learn how to use their impaired side in every kind of activity from eating, pulling to sit or stand, crawling or walking, to waving and hugging.”

The I-ACQUIRE trial is part of a national stroke research network, known as StrokeNet, that involves two national and 29 regional coordinating centers funded by the National Institute of Neurological Disorders and Stroke.

The Fralin Biomedical Research Institute, a university-level research institute of Virginia Tech, will oversee the I-ACQUIRE Phase III trial, which includes funding for the program leadership’s work in Roanoke as well as sub-awards to a national coordinating center at the University of Cincinnati, a national assessment core at Ohio State University, statistics and data management center at the Medical University of South Carolina, and a neuroimaging center at Stanford University.

DeLuca, with Craig Ramey, a professor and distinguished research scholar at Fralin Biomedical Research Institute, and a team of I-ACQUIRE master therapists in Roanoke, Virginia, will directly train the field therapists in the I-ACQUIRE rehabilitation technique and monitor the implementation of the treatment at the 12 locations where clinical treatment will occur.

In addition to training field therapists, Fralin Biomedical Research Institute I-ACQUIRE experts will treat children in Roanoke during the trial in a novel parent-home program.

“We are very excited to be part of and to play a major leadership role in this very important clinical trial for children,” said Michael Friedlander, executive director of the Fralin Biomedical Research Institute and Virginia Tech’s vice president for health sciences and technology. “Both Dr. Ramey and Dr. DeLuca are true pioneers and innovators in the development and implementation of this important therapeutic intervention that they now will bring to the entire country in a rigorously designed and controlled study. As a biomedical research institute with a major focus on neuroscience, brain plasticity, and development and neuroimaging, we are particularly enthusiastic to see the translation and implementation of fundamental scientific principles from the laboratory to the clinic to improve the lives of children and families.”

The I-ACQUIRE trial will pay close attention to training and standardization.

“Babies take naps when they want, get fussy when they want, get sick, and get needy at unpredictable times,” said Joseph Broderick, the principal investigator for StrokeNet’s national coordinating center at the University of Cincinnati. “These are all events that will impact the delivery of treatment within the home. However, the therapists will record the amount of therapy delivered so this can be measured. This is critical for the trial and for the future generalization into practice, if the trial is positive.”

“Parents are desperate for any intervention that can help their child and three or six hours of in-home therapy for five days a week would be extraordinarily welcomed,” Broderick said. “The presence of a therapist in the home is not viewed as a burden, but a huge help and opportunity.”

The therapy is not covered through health insurance, but if it proves effective across the research sites, it could be insured in the future.

“This is well-designed study that targets a specific age group,” Broderick said. “We will see if it works.”

In clinical experiences with more than 30 infants who have received this highly intensive form of ACQUIRE therapy before the age of 2, Landesman Ramey said more than 90 percent have benefited.

“In this trial, we’re focusing on the total child. We are fascinated by how motor development interacts with intelligence and cognition,” Landesman Ramey said. “Besides better movement, we’ve seen children get much better in a language and cognition, and we’ve seen improvements in their social and emotional development. For a family looking at a lifetime ahead of them with a child who has had a stroke, these changes in multiple aspects are perhaps the most profound and consequential transformation.”